Skip to content
We are at that moment when the greens of the northeast suddenly become massive, heavy, and sometimes overbearing to new painters. We love summer, we want to share how delicious it is… and then we hit the wall of green.
I paint with color matrices wherever possible because they speed the process up, and the more one can get out of one’s own way, the better things go. In the case of foliage, a matrix allows one to separate the different green tones in a painting.
I don’t generally paint with a green pigment on my palette (with the occasional exception of chromium oxide green because it’s the exact shade and weight of summer foliage in the northeast). Instead, I mix them:
This matrix is, top to bottom: black, ultramarine blue.
Left to right: Cad. lemon yellow (or Hansa yellow, depending on my mood), Indian yellow hue (or gamboge hue), yellow ochre.
That gives you nine yellows ranging from high-chroma to subdued, blue to almost orange. In addition, you can tweak each color to either side by adding more of one or the other component, and you can also tint each tone by adding white.
Sometimes I shake it up by adding a row of cadmium orange tints, as above.
I’ve taught with this matrix for years and can attest that it helps beginning painters escape the deadly weight of greens, fast.
And here is me, painting in a creek this week. Never happier than when wet, cold, and totally into the process.

At our last painting session, Marilyn whipped out her grayscale markers (making me instantly regret that I hadn’t brought mine along). The forest was remarkably dark and moody this week, and the spring foliage far less advanced than down on the lake plains, and I was finding it difficult to find a range of values.

A tonal drawing immediately reveals the strengths and weaknesses of one’s composition—if it doesn’t work in the simplified view, it isn’t going to work after you’ve invested hours painting, either. In fact, the painting I did in that last session ended up mired in a compositional issue that would have been immediately apparent had I done some fundamental drawing before starting, but I was tired and cutting corners.
To me, the difference between an adequate painter and an excellent painter is the amount of time said artist spends drawing. I wrote earlier this week about watercolor sketching, and have written frequently about drawing with a plain, ordinary graphite pencil.
In the field, however, I most often sketch with oils on small canvases. Here is a sketch I did of the canoes at the Irondequoit Inn, and another of the breakwater at Irondequoit Bay.* They took about as long as a graphite or watercolor sketch would have, but their purpose is somewhat different: they are simplified and monumental in the same way as the tonal grayscale marker (which is by far the fastest way of sketching).
I did three other paintings in the Adirondacks. One was a complete bomb (despite having spent a long time drawing and an equally long time painting).  I followed that up by inadvertently discharging the battery of my car outside of cell-phone range, leaving me stranded with a dead car with its keys stuck in the ignition. Marilyn set off on foot to get help while I dug out the battery—not as obvious as you might think, since it’s stowed in the side of the trunk. But a bad painting and a dead battery did nothing to dampen my high good spirits.

I’m struggling with something, which is by no means uncomfortable when you’re not fixated on the results. I have been working for the past few years on patterning my paint-handling in a more abstract way, but in the process I’ve lost some of the depth that a more traditional landscape approach gives. Now that has to be reintroduced.

But my hermitage (which became less hermit-like as the week went on) is over and I’m happy to be back in Rochester, in my studio, surrounded by my family, friends, and students.
*An alert reader will note that the Irondequoit Inn and Irondequoit Bay are about 200 miles apart. I leave that mystery to you to decipher.
Yesterday, I wrote about a Stillman & Birn Alpha Series sketchbook that Jamie Grossman gave me, and my first attempt to pre-sketch my paintings in it in watercolor. 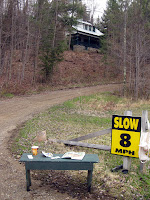 This morning as I walked my appointed rounds, I carried the sketchbook and watercolors instead of my camera. The first thing I noticed—of course—is that it took rather longer to make my circuit than it usually does.
I’ve had my eye on this lovely house set on a hill for a few years, and there being a convenient bench, I sat down to sketch it. (I decided that it will be a better painting when the leaves are leafed out.) From there, I moved to a tree in the deep woods with a triple trunk, which proved to be very difficult, but which was good observationally. In both cases, I was approaching the project too much like real painting, which just irritates when all one has is one small brush.
This last sketch I did much more quickly, just ripping off a pencil drawing and then flooding the sheet with a color map. And it is frankly more satisfying than either of my earlier sketches (which you can’t see because I finished my day after dark and forgot to photograph them).
Because I didn’t have a toned canvas, I decided to underpaint my finished study in alkyds. (By this point, time had ceased to be a meaningful constraint.) And it was a good day for them, too—the wind whipping off the lake dried them in no time. My alkyd painting is a simplified but direct rendition of the watercolor sketch.
In the end, this painting took me about four hours, and that is about what I’d expect for a field sketch of this size (12X16). So whatever time I spent on the watercolor sketch was saved on the final project.

Marilyn Fairman has joined me in the hermitage, and we spent the afternoon painting intensively. Tomorrow, we have all day to paint. What a joy that will be.

I stopped to see my pal Jamie Grossman last week, and we fell into a conversation about sketchbooks. We both use them religiously, but (unlike Jamie) I tend to use the cheapest sketchbooks available and fill them with scribbled notes. Ever generous, Jamie gave me a Stillman & Birn Alpha Series sketchbook and suggested I try using it with watercolors, gel pens, acrylics, or ink instead of simply drawing with a pencil or graphite stick.
Jamie does lovely sketchbooks that hover on the line of being artist’s books—very lovely, very lively. I’m not interested in going there, but I can see the value in doing color sketches instead of pencil sketches. And all mental stretches are a good thing, right?
I like to sketch whenever I have to sit, so I brought it with me to church last Sunday. However, a dynamic young rapper named CuevasWalker was preaching, and he defied capture in any form except the loosest gesture drawing.
I am in a self-imposed hermitage this week, which seems like the perfect opportunity to test Jamie’s idea. I brought only a #2 pencil and a Cotman pocket watercolor kit (with its one brush). My reasoning is that if my sketch kit expands beyond what I can put in my pocket, it’s useless.
Obstacle number one was apparent as soon as I reached my location: sketchbooks don’t fit on easels; they need to be balanced. My first sketch, therefore, was done from the driver’s seat of my trusty Prius—and I worked very fast because I was parked in a fire lane.
I tried again, balancing the sketchbook on top of my pochade box. That worked just fine, but I don’t think this sketch told me more about my composition than a pencil drawing would have.
Then I moved to oils. And that ended up being one of those transcendent experiences where one is totally engrossed in the process of painting, and whether it turns out well is immaterial (although, looking at these sketches, I do wish I’d worked from my original vantage point).

I will try this process again today. Marilyn Fairman joins me to paint for two days. I’m both excited to paint with her and sad to see the solitude end.

P.S. Sorry about my month’s absence. We were marrying off our eldest, and that was an amazing project in itself, one which left no time for other creative ventures.