Skip to content
Two men look out through the same bars:
One sees the mud, and one the stars.
(Rev. Frederick Langbridge)

I spent the week in Maine, reconnoitering for my summer workshops, and generally considering how I can best shed the nautilus shell of my current life. After all, if you look at that shell, more and more compartments are… not empty, but collecting dust.

Having just visited the Farnsworth again, I’m reminded of Andrew Wyeth’s painting, “Chambered Nautilus.” (The Farnsworth has many lovely studies by Wyeth that demonstrate just how meticulously he prepared each of his paintings. Any serious painter would benefit from studying these drawings, and I strongly urge you to visit the Farnsworth and spend time with them—in particular the studies for Maidenhair.)
“Chambered Nautilus” shows Wyeth’s mother-in-law gazing out her bedroom windows during her final illness. Initially, Wyeth considered using a conch shell. “It is believed that someone just brought the nautilus shell and he preferred it, but I like to think that it was symbolic,” Erin Monroe of the Wadsworth Atheneum toldthe Hartford Courant. “He often designated objects as stand-ins for people, and a nautilus has all these chambers. His mother-in-law was confined to a chamber and couldn’t leave.”
Wyeth himself had this to sayabout the painting: “I did the picture right there in the room…and she would talk to me about her childhood in Connecticut.  She was a great woman, one of those people who never grow old.”
But of course we all eventually do grow old, and the reality is that eventually most of us end up with our worldly goods pared down to a nursing home bed and a recliner. Still, before that happens, “…I have promises to keep/And miles to go before I sleep.”
Most of us do a pretty good job of blooming where we’re planted, and my family has been no exception. We came to Rochester for work, and we’ve had a good run here. But I have always used it as a launching pad. In the earliest days, I traveled back to the Buffalo area to see my design clients, and after my kids were old enough, I started traveling to NYC to take classes, traveling around the East Coast to show paintings and traveling elsewhere to paint and teach.
By all rational standards, 2013 is a mad time to think of picking up sticks. We’re still in the throes of economic malaise, I’m definitely getting older, and we still have a kid in school. But there is an insistent refrain in my head: “It’s now or never.”
And so I debate options: move to an art town and open a gallery? Buy a small house in Deer Isle and turn out work that I in turn sell to other galleries? Do I even need a permanent home? With that last idea in mind I stopped in Amsterdam, NY and looked at trailers and motor homes. I was intrigued, but when I got back to Rochester I realized that I do like my own bed.
Where does this all end? I don’t know. As my pal Loren said last week, “The options are infinite.”
“True,” I answered, “but the parking is limited.” Which is not exactly true, but our time here on earth certainly is. And I want to spend as little of the rest of it as possible dusting the inside of my chambered nautilus shell.

The above cartoon has been making the rounds among my musician friends this week, and for good reason.
Maya Angelou said the caged bird sings for freedom, but in fact birds—caged or free—sing because their songs are hardwired into them. The mother of a young performer said to me recently, “She has always been a singer. When she was a little girl, I would hear her singing while she played.” Likewise, my mother would tell you that I have had a pencil in my hand since I was old enough to sit up.
But in truth, almost all children sing, dance and draw. It seems to be hardwired into them the same way singing is hardwired into songbirds. Non-verbal self-expression is natural to them, and they often use art in ways that amaze adults. But somehow most children learn to stop making art as they enter adolescence.
Perhaps this is because verbal and spatial reasoning has finally caught up with their expressive skill. But there will be the occasional kid who defies social pressure and continues to produce art; to me, that is the very definition of talent and the best indicator of long-term success in visual arts. That obsession is far more important than whether he or she can render a face or a horse according to the rules set down by their art teachers.
Even among those who remain obsessed with making art, a different and more insidious joy-killer happens when art stops being an avocation and becomes a vocation. That is the need to measure success in terms of money or fame, rather than intent or that far more subjective issue, quality. To me, this is the most paralyzing problem I face as a painter.
Painting is a form of communication, and hits on a website, sales, and shows are the only way we can measure who is listening. There is, after all, little point in talking to oneself. But painting is a form of communication with a long window. For all I know, I may be talking to people who aren’t even born yet.

Note: my website is up, at www.watch-me-paint.com, and, yes, it has a counter. 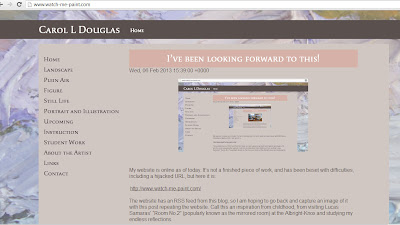 My website is online as of today. It’s not a finished piece of work, and has been beset with difficulties, including a hijacked URL, but here it is:
https://www.watch-me-paint.com/
The website has an RSS feed from this blog, so I went back and captured an image of it with this post repeating itself. Call this an inspiration from childhood, from visiting Lucas Samaras’ “Room No.2” (popularly known as the mirrored room) at the Albright-Knox and studying my endless reflections.
The web designer isn’t totally finished, so she doesn’t want herself tagged, but she’s doing an awesome job!
This weekend I spoke with a former student who is now in his fourth semester at Rhode Island School of Design. Inevitably, we discussed criticism. He made a point I’ve heard from other students: all art school criticism is fundamentally self-referential. What matters isn’t the technique, intellectual rigor or theory brought into the process, but how the work relates back to the artist.
This circular thinking came back to me forcefully this morning. For the past few weeks, our pastor (Tony Martorana at Joy Community Church) has been talking about spiritual rejuvenation. I was struck by how much modern art needs that. Truly, a valueless, concept-free, rudderless visual art world is nothing more than those dry bones Ezekiel so powerfully and movingly described.
But that’s still abstract; I wrote last week that I don’t see myself having the moral intelligence to paint the cardinal virtues. Pastor Tony used an agrarian metaphor to describe spiritual rejuvenation, to which I can easily relate. And I don’t mean to denigrate the spiritual significance of his instruction, but I can see in it a path to better work as an artist.

The following are his bullet points:
1.       Remove the rocks. In the northeast, our fields are planted on former forests, where acidic soil caused rocks to rise to the surface. So our fields are surrounded by dry stone walls made of rocks painstakingly removed by our ancestors.

Rocks make soil hard to till and block moisture and root growth. They are not living things; they never were living things. We all have metaphorical rocks in the landscape of our painting technique. These are the internal voices that say things like, “I can’t,” “I’m a second-rate talent,” “I don’t have an MBA,” as well as the bad work habits and distractions that come from a life of working alone.

2.       Remove the stumps. These are things which once lived and which might have produced good fruit, but do so no longer. In my life, these are primarily the lessons of the dead, which were perhaps well-meant and instructive when I was fifteen but which tend to hobble me today. (That isn’t meant to denigrate the importance of those people, for in the not-too-distant future I may be a stump to that kid now at RISD.)

3.       Remove the weeds. In early spring, everything is covered with a green loveliness, and it’s frankly hard to tell the useful plants from the bad. Then overnight your garden is overrun with bindweed and dandelions are blowing across the lawn. I often have a hard time distinguishing between good and bad ideas, because often the bad ones are frankly more seductive. In the garden, I use my intellect and experience to determine which plants are weeds, and I pull them before they set roots. I ought to be able to do the same with my bad ideas.
4.       Plant a sufficient harvest. There are many factors which limit the harvest, but it can never be greater than that ordained by what we’ve planted. If you never work, you can’t expect to create very much of a body of work, can you? If you work sporadically, or half-heartedly, what do you expect to pull out at the harvest time? If you plant weeds, can you expect to harvest fruit?
5.       Then wait. You’re not going to harvest a crop overnight. In fact, in the world of art it is very possible that we may not live to see our harvest at all. But that doesn’t mean the harvest won’t be there.
(All the bullet points are Pastor Tony Martorana’s and were given by him as points of spiritual growth. This specific exposition and application to painting is my responsibility and I don’t mean to misquote him or twist his initial message.)