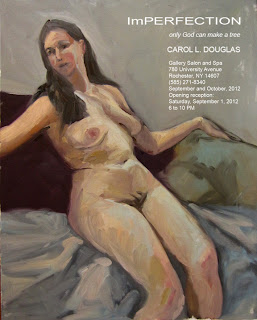 Final week! It’s been a good show and well-received, but it comes down November 1. If you want to see it, I’ll happily meet you there.
Address
Gallery Salon & Spa
780 University Ave
Rochester, NY 14607
Hours
Tuesday-Thursday 11am-8pm
Friday 11am-7pm
Saturday 9am-3pm
September and October are New York’s grandest months, when our state throws off its sartorial rectitude and arrays itself in scarlet, purple, and cloth-of-gold. And the last week in September was the best possible time to be at the Irondequoit Inn with 14 of my fellow New York Plein Air Painters (NYPAP). This organization is being wonderfully revived by painter Marilyn Fairman, who organized the event.
However, there’s a reason Native Americans considered the Adirondacks their summer home. Its cold is brooding, often accompanied by rain and mist, and the weather is fickle.  Last autumn, the mercury was hitting 80° F, but this year it was pouting in the 40s and 50s, with rain and wind. That often corresponds to the best fall color, but it’s chilling to work in. However, we are all dedicated outdoor painters, so of course we soldiered through.
At one point, I trekked through a drenching downpour to find Janet Yeates turned out like the Gloucester fisherman and Ruth Crotty in knee-high Wellingtons, the hood of her rain slicker pulled tight around her face. Both, of course, were too stubborn to quit. Ruth was tarping down her easel under a pine tree, muttering, “What else could possibly happen?”
“Lightning?” I asked.
Mercifully, I was wrong.
The start of our retreat coincided with the end of a workshop given by National Geographic photographer Ralph Lee Hopkins. The end of it coincided with the start of my painting workshop. The Irondequoit Inn was a whirling parade of the visual arts, running for two weeks straight, and it would be difficult to express just how energizing it was.
My trip started with Bruce Bundock’s opening at Locust Grove in Poughkeepsie. The show should have been called Friends in Low Places, because Bruce’s gift is finding the sublime in the pedestrian. This review features one of his finest paintings, but this painting currently is my favorite: a classic composition that might typically be used for a villa on the French Riviera, but which he translated to a raised ranch along the Hudson, with a tanker in the background. Since it’s Bruce’s day in the sun, I might as well add that he was recently profiled for his day job as a preparator at Vassar, here.
For several years, my goal in landscape painting has been to capture the sense of tapestry rather than the sense of distance.  I find that much more difficult than building a global scene comprised of discrete objects like buildings, islands, lakes and hills. I’ve gone past the point of liking or disliking the results; I am simply compelled to paint this way. Nothing was different this week: as my friends and then my students turned out fantastic paintings of the woods, fields and lakes, I continued to slash and burn amongst the trees.
One afternoon we finished up early and took a canoe trip in Piseco Lake and up the mouth of Fall Stream. We each brought small watercolor kits, but no painting was done (although the paper was certainly damp by the time we finished). But we did look at the mists, the black water, and the gold-drenched grasses on their earthen hummocks.

At 94, John Porter is the Piseco Company’s oldest living shareholder. I’ve had the good fortune to spend time with him during the last three autumns. He’s a retired woodsman, and wonderfully knowledgeable about both natural and human history. He’s getting a bit frail these days, and mostly looks at the woods from the front parlor. On the last afternoon of my workshop, we were working on architecture. I had set up a painting of the lovely old green chairs and dinner bell on the Inn’s commodious porch. The rain vanished, the sun came out, and it was suddenly warm. John joined us for a few minutes, so I put him in my painting. I’ll share it with you when it’s done, because to me it’s a wonderful memory of a precious day.