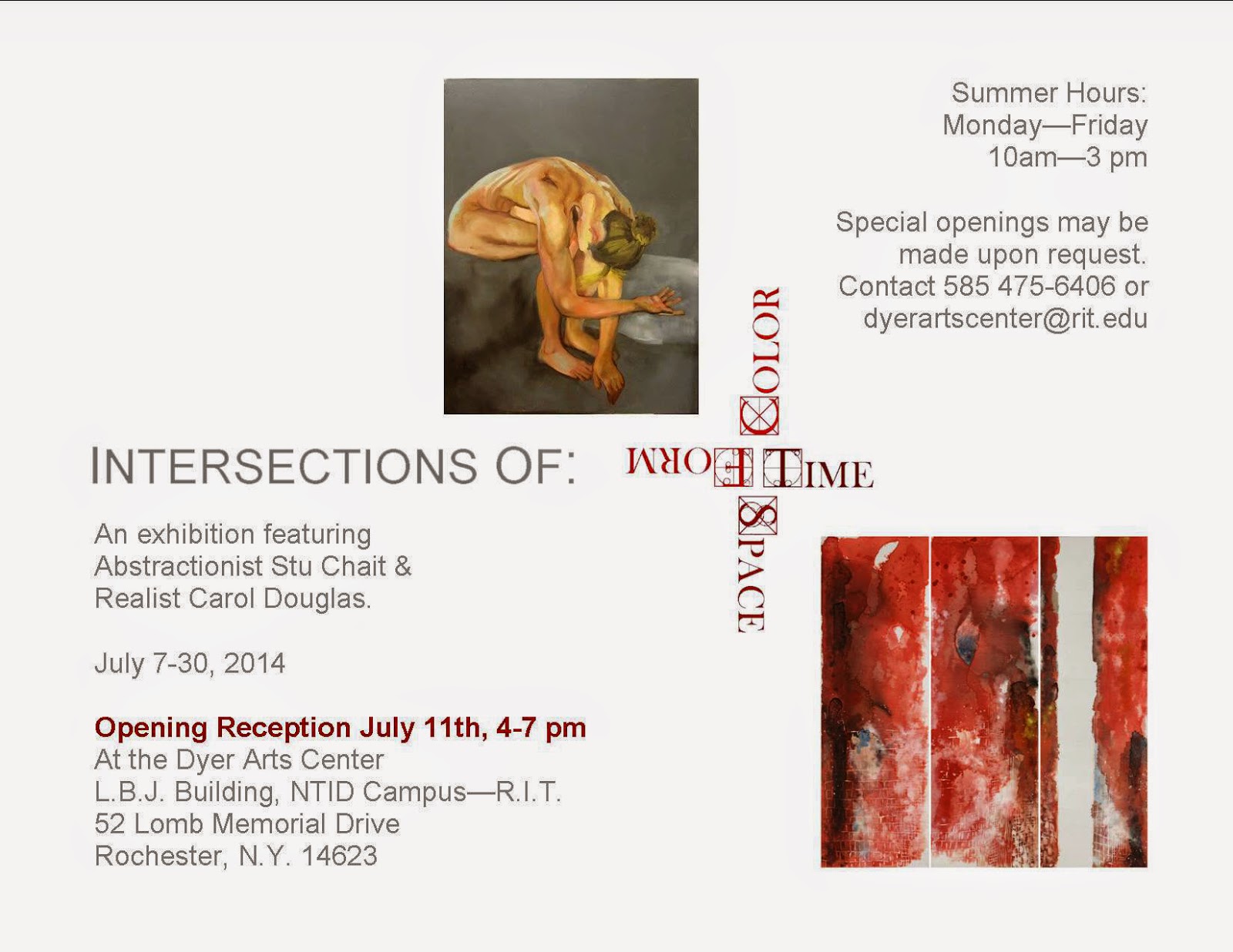 My show, God+Man, is at Bethel’s AVIV Gallery, 321 East Avenue, Rochester, until the end of June. This is a reprise of a show created for the Davison Gallery at Roberts Wesleyan, and it’s easy to visit: just enter through the rear Anson Place doors across from the Body Shop.
Our student show runs to the end of the month at the VB Brewery, 6606 Route 96 in Victor. (It’s still possible to bid on one of the abstractions there to benefit the Open Door Mission. The brewery is open Wednesday-Sunday.
On July 11, Stu Chait and I open “Intersections: Form, Space, Time & Color” at Dyer Arts Center at Rochester Institute of Technology’s National Technical Institute for the Deaf. The show runs July 7–30. This includes more than sixty paintings. From me, that’s both my studio nudes and plein air paintings; from Stu, that’s mostly abstraction, although he does include a few plein air pieces from back when we first met. 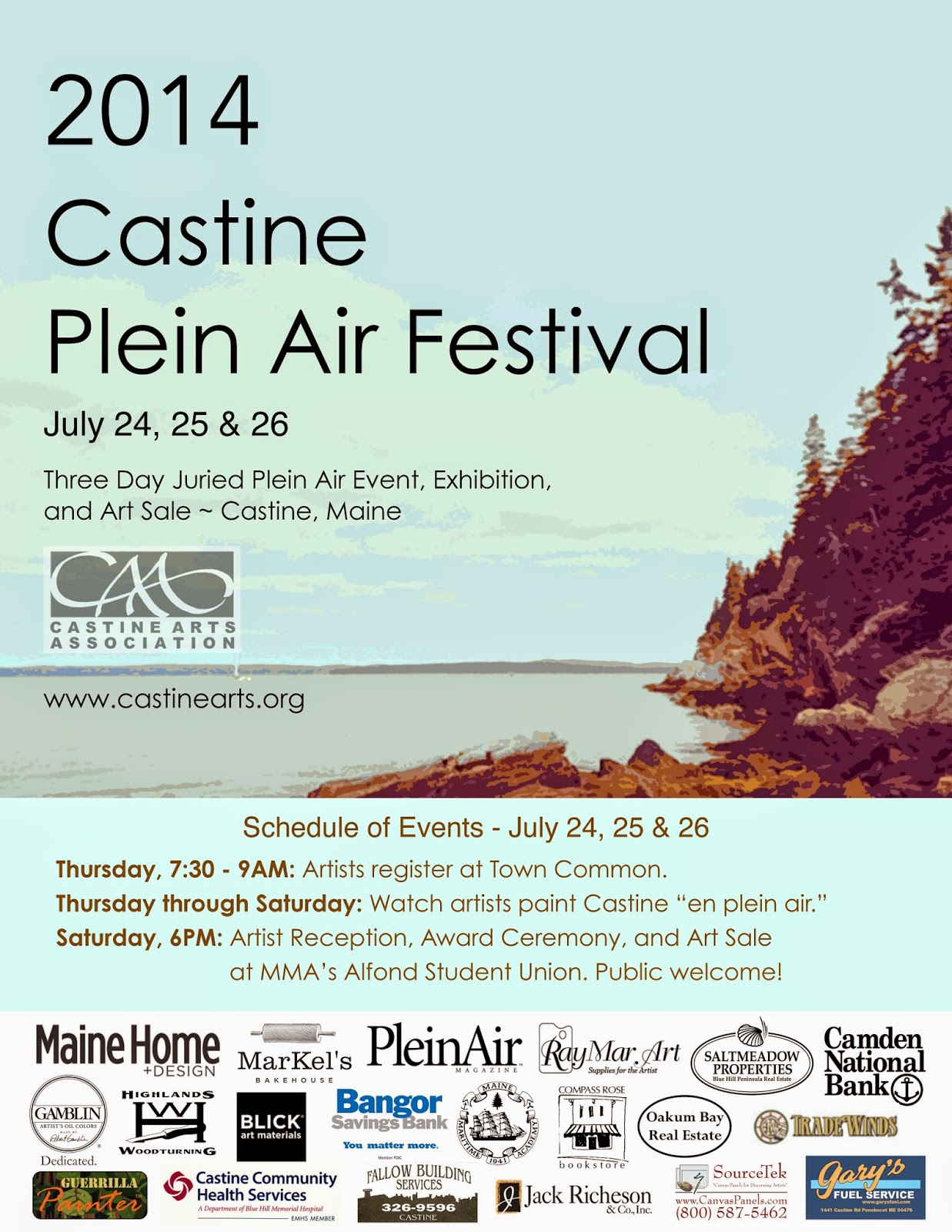 From there I go to Maine, where I’m participating in Castine Plein Air from July 24-26. This event draws 40 juried artists from around the northeast to the historic city of Castine, home of the Maine Maritime Academy.
Next on the docket is Camden Plein Air, hosted by the Camden Falls Gallery. The painting dates are July 31-August 8, and the work will be hung in the gallery during the month of August. 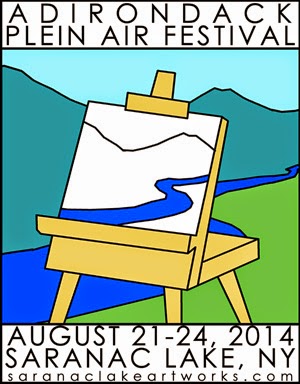 Then my workshopruns from August 10 to 15 in Belfast, ME. There’s still room, but not very much, since I’m only teaching one of them this summer.
Then—after catching my breath for a day or two—I drive to Saranac Lake, New York, to participate in the Adirondack Plein Air Festivalfrom August 21-24. My friend and student Carol Thiel has been telling me about this for a while now, but what really clinched the deal was realizing that many of my Lower Hudson Valley PAP pals would be there.
I’ll be home for Labor Day!

I have three openings left for my 2014 workshop in Belfast, ME. Information is available here.

The other day I wroteabout photographer Terry Richardson and allegations that he abused his models. I said, “Artists and their models can be friends; sometimes they’re even lovers. But every artist-model relationship also involves an implied balance-of-power calculation.”
I’ve worked with a lot of models over the years, and I think my relationships with them have been professional and courteous. Over the years, several of them have become my friends, including Kate Comegys, Gail Kellogg Hope and Michelle Long.
Michelle is as close to an international model as Rochester has. She collaborated on a project with Keith Howard called “Eve’s Garden: The Lost Creation.” I wish I’d thought of this idea, because it revolved around the idea of printmaker Howard sending his painting work offshore to China. The result was visually pleasing and perfectly in tune with the zeitgeist.
I’m finishing a painting of Michelle for my upcoming duo show with Stu Chait at RIT-Dyer. True to form, Michelle won’t be there; she is leaving to work in Uganda. If you want to support her at the Ugandan Water Project, go here.

This painting has been sitting unfinished for a long time, because I was mad at it. It taught me the limits of drafting huge paintings in my 18X18 studio. I ended up having to redraft her head and shoulders to correct the severe foreshortening.

Occasionally someone asks me how to mix skin tones for different races. I think that’s a funny question, because I use exactly the same paints for everyone; only the proportions change. For that matter, I’m using the same paints I use to paint foliage.
I have three openings left for my 2014 workshop in Belfast, ME. Information is available here.
Sure, I get to drive around and visit with fascinating people and go to interesting shows and occasionally pick up a brush and paint something, but I spend more time than I’d like on bookkeeping and that bugaboo of all sales: inventory control.
Stu Chait and I are putting the final details together for our upcoming show at RIT-NTID’s Dyer Arts Center, which opens July 11 from 4-7 PM. If you’re in town, you should really find a way to get there, since this is a sprawling show.
Stu and I met at the Ellwanger Garden here in Rochester. We were the only painters there, so we stood at opposite ends of the garden and painted facing each other. I’ve long since sold that painting, but I painted another painting with him at the same place, which will be in this show.
It’s been years since I pulled out all my work to organize a show, but since the passage of time is part of our theme, I inventoried every piece of work I have in play right now. That is nearly a hundred pieces, which is less absurd when you consider that I have three separate bodies of work: landscape, figure, and faith-based. (Even with all those paintings, I am actually scant on work to meet specific summer commitments.)
What surprised me even more is how many paintings are no longer in my inventory.  Next winter I’m going to go through my photo archives and sales records and try to piece together a comprehensive catalogue. I loathe that kind of task, but if I don’t do it soon, I’ll never get it done.
I have three openings left for my 2014 workshop in Belfast, ME. Information is available here.
We have two competing views of women here at the start of the 21st century. Neither is healthy: woman as casual sex object vs. woman in a burqa. I painted Submission, above, at the beginning of the 2003 Iraq War. Sadly it hasn’t gotten any better in the last eleven years.
Terry Richardson is an American fashion and portrait photographer whose clients and models include the glitterati of New York. He has repeatedly been accused of inappropriate sexual behavior. “Is Terry Richardson an Artist or a Predator” tells us that he’s both. However, he’s also a product of our culture.
Richardson’s assistant, Alex Bolotow, has been photographed fellating her boss many times, starting in her very early twenties. “There was something exciting about being involved in something that feels just really freeing,” she said, “like, ‘Oh, I’m totally expressing myself, and this is great.’ I remember being like, ‘I’m just glad to be alive in a time when this is happening.’”
Artists and their models can be friends; sometimes they’re even lovers. But every artist-model relationship also involves an implied balance-of-power calculation. In the case of Richardson and his models, that varied depending on who was in front of the camera.
“Miley Cyrus wasn’t asked to grab a hard dick. H&M models weren’t asked to grab a hard dick. But these other girls, the 19-year-old girl from Whereverville, should be the one to say, ‘I don’t think this is a good idea’? These girls are told by agents how important he is, and then they show up and it’s a bait and switch. This guy and his friends are literally like, ‘Grab my boner.’ Is this girl going to say no? And go back to the village? That’s not a real choice. It’s a false choice,” said an agent (who chose to remain nameless).
Richardson is an amazingly messed-up guy. He was the child of a broken marriage. His father was schizophrenic and drug-addled; his mother was brain-damaged. He’s taken his trauma and driven it brilliantly through a culture surfeited with sex. It’s what the public clamors for: used copies of his books sell in the thousands of dollars.
Is repugnance at his working methods a sign that our attitude has changed toward casual or even coercive sex? Not at all. Terry Richardson is just the sacrificial lamb for a culture that is still wallowing. Anathematize him, and he’ll be replaced.

Yes, the burqa is abusive, but so too is our current western approach to sex and relationships.