Skip to content
There are 629 living species of conifer in the world. In contrast, there are 2600 known species of palm trees, with the greatest diversity being on islands. They range in shape from draping to spiky to fan-shaped to pom-pom.
Studying the differences between trees helps me get the structure right in my paintings. In Karl’s Garden, yesterday, there were three different species shading the table. It’s a challenge to paint them accurately without being pedantic.
I vary my compositional technique depending on the subject. When I’m unsure about positioning, I sketch on paper, crop my sketch, and transfer the result to my canvas. For boats and buildings, I use a watercolor pencil and a straight edge. I draw directly on the canvas, using water for erasure.
In my studio, I often start with an abstracted grisaille. This can be risky in the field, since those sloppy wet darks can migrate up into the painting, creating mud. Being rigorous about the fat-over-lean rule helps prevent this. So does marrying the underpainting color to the final shadow color. For this reason, I often end up using a violet-blue rather than the more conventional desaturated reddish-brown.
We couldn’t get odorless mineral spirits in the Bahamas. Our choices for solvent were conventional white spirit or turpentine. We chose turpentine. It dries very fast, making the bottom layer less squishy than it would be at home. Going directly to paint meant I could develop paintings that relied on patterning, rather than modeling.
I like complicated images (even though I usually regret them halfway through the painting). I look for angles, light, and, most importantly, the negative space created by the objects. Then I determine where on the canvas the most important elements should fall. Quite literally, I paint quick circles in those spots and then stretch and bend the other objects to fit into the space.
There’s a limit to what a grisaille can tell you about composition. In addition to value structure, paintings have chromatic structure. That was where I went wrong with the painting I wiped out this week. I didn’t take into consideration the coolness of the sea and sky when I was doing my underpainting. If I had, I could have swept them through the painting.
I had a painting teacher once who liked to intone “there is no negative space.” She was trying to say that there are no areas of the painting where nothing important is happening. This is true. However, it is useful to have a term to describe the interstices between objects. In painting a complicated image, those negative spaces are critical. For trees, the silhouette is important, but the traps—that negative space where sky shows through the canopy—is paramount.
My week of painting in the Bahamas is now over, and I head back to Boston this afternoon. “The real question,” I told Bobbi Heath this morning, “is, where am I heading next?”

In towns like Camden, ME or Freeport, Grand Bahamas there are year-round residents, seasonal residents, and vacationers. Because painters sit or stand like great lumps of coral for long periods of time, people forget that we’re there. That means we often overhear conversation. Anywhere Americans gather on the road, I will hear a variation on the following:

“I love this place!” the passing tourist exclaims.
“You should have been here before the hurricane/market crash/election/everything got built up,” responds the seasonal resident.
Shortly, they move on to the crux of the discussion: “The problem with these people is…”
I assume this conversation has been happening for as long as people have traveled for fun, and that there are variations in Chinese, Japanese, and every other language. It makes me want a gin-and-tonic on the verandah, reminding me of the sun setting on the British Empire, of Henry James and Rudyard Kipling.
Normally, I enjoy listening to it, but I was off my game on Friday. Of course, this had nothing to do with the conversation and everything to do with composition. There is nothing inherently interesting in the shape of inlets on low-elevation, sandy cays. Without some background architecture—jetties, buildings, boats, trees—they are simply a boring ellipse that barely changes color.
On the other hand, the water itself is gorgeous. I want the opportunity to solve this dilemma, but the beach here is too hot for us pasty northerners. We take quick photos and then retreat to the shade of the palms.
We’ve been warmly welcomed by Eva and Karl Dehmel, who have invited us to paint at their beachfront house twice. Here the conversation bounces along far less predictable pathways. I wrote about Eva’s artwork last week; Karl is also a retired doctor and an avid gardener. Were I not on a mission, I’d have been among the palms with him and his machetes.
Karl has a light hand with the jungle, allowing it to sprawl about in its tropical way. The sky holes and traps are very different from those created by northern deciduous trees. I have been painting much more intuitively than normal, eschewing any kind of compositional sketch or pencil drawings. The subject seems to bring out the Fauvist in me.
“It looks kind of like a Paul Gauguin,” my husband mused, when I showed him Karl’s Garden.
“I think it looks more like a Tommy Bahama shirt,” I responded.
Alas, all good things come to an end, and we said our final goodbyes to Karl and Eva on Sunday evening. As we headed back toward Freeport, I noticed that I was coming out in hives. It was too late to get to the grocery store, which closes at six, and we’d just left the company of two doctors. Talk about bad timing.
I’m an old hand at allergies, however. I figured I could make it through the night without an antihistamine. “You don’t want to go to a Bahamian hospital if you can help it,” Cali Veilleux had told us.
By 11 PM, I was covered with bumps and my lips were swollen. I slathered myself with aloe and debated waking up Bobbi Heath to take me to the Emergency Room. Whether it was a food, bug spray, sunscreen, the sun itself, or something environmental, I’m still swollen and itchy this morning. In a few minutes, however, we can pop over to the store and get some Benadryl. That should be the end of that.

We rented our Bahamian cottage from a fellow artist from Spruce Head, Maine—Cali Veilleux. She’s a warm soul and has been very generous in sharing her time and knowledge. “I love seeing artists here,” she told us. (If you’re in the market for a Bahama rental, by the way, her place is comfortable and immaculate.) 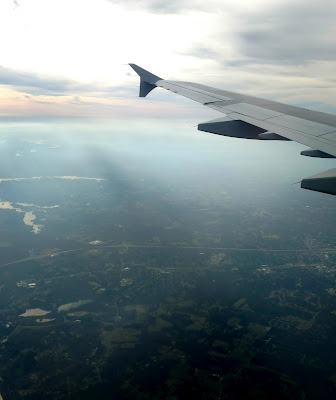 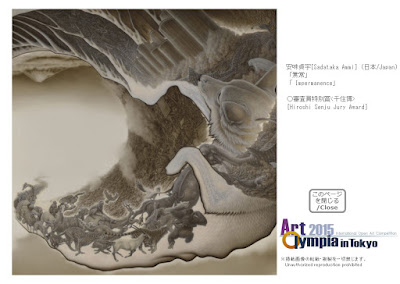 Like all artists, I get frequent notices touting upcoming shows. If I am not familiar with them, I’ll look at last year’s entrants and prize winners to see if there is anything interesting there. The second international Art Olympia in Japan interested me. The prizes are big, the institutions it’s affiliated with are legitimate, and the jurying is transparent. But I don’t expect to apply, because I—like many American painters of my age—am too impressionistic for this competition.
People often tell me their goal in studying with me is to become looser. This has been a core principle in American art for a century. The trouble with this kind of universal truth is that, by the time we’ve adopted it, it’s probably outdated. 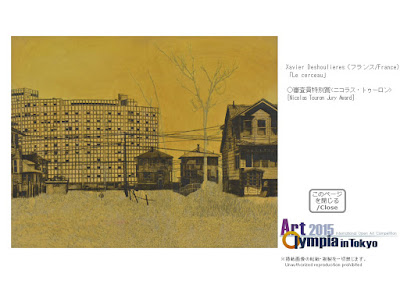 Often, people who say they want to be looser are conflating that with confidence and proficiency. Confusion and insecurity are what constrict our drawing. Whatever style one wants to work in, one isn’t going to succeed unless one takes the time to learn one’s craft, to draw, and to master one’s materials. 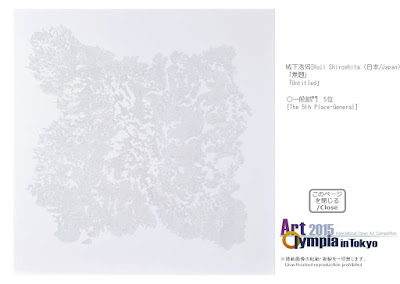 Meanwhile, we live in a very edgy world. Modern society’s hallmark is anxiety. In 2012, roughly 13% of Americans were taking prescription antidepressants (which makes you wonder what value there is in living in such a rich, safe country). We spend lots of time in digital space. Our visual thought is driven by video, not stationary images. Video’s goal is to fool us into believing we’re in real space and time, albeit a very surrealistic dimension. All of that is reflected in the work at Art Olympia. 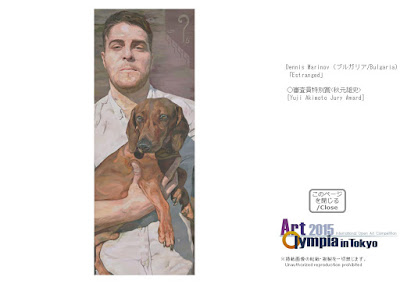 The art there is part of a larger trend toward surrealism. I like reading magical realism, so I’ve often wondered why I have no interest in painting it. Part of the problem is that to do it successfully, you must be fantastically detailed, as was Salvador Dalí. More importantly, I’m with JRR Tolkien in not wanting to amplify the anxiety of the current world with morbid paintings. 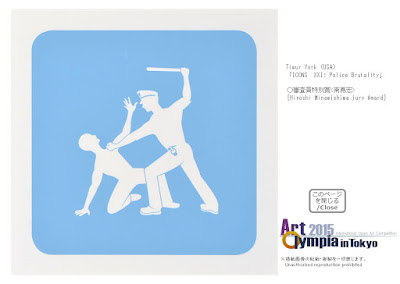 Since 2015 was the first Art Olympia show, it’s not surprising that the prizes went largely to Japanese artists. The American work is comical in comparison, falling on the side of being overly political and artistically naïve. But overall the work is sophisticated, well-realized, and perfectly executed. It’s well worth spending some time browsing through the 2015 winners. You can find them here.

Last week, I wrote about my troubles painting lobster traps. Bob Baines, a lobsterman from S. Thomaston, ME, kindly lent me a trap to study. As a teacher, I know the only answer to confusion is close examination of the troubling object. As a student, I don’t like hard work any more than anyone else. Exercises are good for us, but so much more exciting when they’re still in the planning stages.