Skip to content
“If you ask me, Jeeves, art is responsible for most of the trouble in the world.” (Bertie Wooster)

In the wake of last week’s horrifying shooting in Parkland, Florida, Rochester educators have had a jittery week. “I’m coming tomorrow morning and I’m going to shoot all of ya bitches,” 21-year-old Abigail Hernandez, an adult student with disabilities, allegedly posted on East High’s Facebook page. A 23-year-old rapper, Randy Ross, was arrestedfor making a video called School Shooter, which he filmed on Greece Central School property. Officers deemed the video a terroristic threat. I’ll get back to that.

Sir John “Kyffin” Williams was a landscape painter who lived at Pwllfanogl, Llanfairpwll, on the island of Anglesey. He is widely regarded as the greatest Welsh artist of the 20th century. (If you’re like me, this is the moment where you first come to grips with the idea that there is a Welsh school of painting at all.)

I’m sorry there was no post yesterday. Grandchildren are human petri dishes, and mine gave me their norovirus. (That’s the nature of children, and I would change nothing.) I’m feeling better today, but not 100%.

Ironically, I’d planned to write about action vs. reaction. Every job has moments of each designed into it. For example, the EMT who saves your life is mostly reactive, responding to what’s happening to you and the instructions he’s getting over his radio. The engineer designing a new system of 0s and 1s is mostly active. As he interacts with his team, though, he is reactive.
But that’s in the particular. Generally speaking, most successful people are reactive much of the time. They’re listening to their competitors, their peers, and their customers, and trying to give the people what they want.
The self-employed artist is stubbornly individualistic, but that doesn’t save him from reactivity. We treasure our active tasks, like painting or marketing, that we initiate and drive ourselves. Then there are tasks that are in response to others’ initiatives. For example, at 2 PM today, I must send an email. I don’t know why this particular moment is important to the organization but I do know that a small part of my mental energy today will be spent wondering whether gmail’s delayed-send feature really works.
Painting commissions, while on the ‘creative’ side of our ledger, are fundamentally reactive tasks. This is why some artists don’t enjoy them as much as other work. The impetus, the spark of idea, didn’t originate with us.
All sole proprietors exist in this maelstrom of action and reaction, which tug and vie for our scarce time.
Chief among the reactive tasks is bookkeeping, which I’d never do at all if the IRS didn’t prod me into it. Before I can file my taxes, I must audit my records to determine if they’re true. The whole job takes me the better part of a week. I think I should try doing the audits monthly. However, every February, I am so happy to be free of bookkeeping that I just go back to the Excel equivalent of stuffing receipts in an envelope.*
This year I decided to try to paint in the mornings and work on bookkeeping in the afternoons. This was a total failure. I would just settle in to my canvas and it would be time to move over to the dining room and its carefully separated piles of papers.
I’m back to my usual technique, which is to schedule tax prep during the nicest week of winter weather. It’s a knack, I tell you.
Why can’t I just ignore my taxes for a week and get back to them when the weather gets bad? Despite my protestations that I wouldn’t do this to myself again, I’ve arranged to be shot out of a cannon again this spring. On March 4, I’m leaving for a short painting trip through Alabama, Mississippi and Louisiana. My third daughter is getting married in May. And after that is my regularly scheduled season. It’s now or never, and the IRS doesn’t like never.
I have learned that tasks tend to be amorphous until they’re pinned down. That means that small ones, like “order paint” loom as large as “bake 1000 cookies for the wedding reception,” a job I will be doing without my designer pal Jane this year. Writing them down and classifying them helps me keep them in perspective.
I’ve written before about Bobbi Heath’s time management system, here. It’s a simple system that can stop you from losing your mind when you’re overwhelmed. Whatever system works for you, now is a great time to deploy it, before the weather gets fine and you’re on the run.
*I had a GPS that kept mileage records. I just retired it and bought MileIQ. It’s fantastic for the plein airpainter, who starts and stops and is pulled along by the wind.
Drawing six similar objects will teach you to observe details.

I once got a commission to paint Lazy Jack II in Camden Harbor. I was pretty happy with the results. As I finished, two deckhands from another boat stopped to look at it. Their eyes met. “You’ve got the…” one started. “It’s not important,” said the other, and they quickly walked away. I’ve never figured out what’s wrong in that painting, but I did realize that you can only fudge the details so far. The experts will find you out.

In the normal course of things, you’re not going to see many square-rigged vessels here in mid-coast Maine (although you could see USS Constitution if you drive down to Boston). You’ll see fore-and-aft rigs, where the sails run above the keel rather than perpendicular to it.
A boat’s sails all suspend from a vertical spar called the mast. This transmits all the power of the wind pushing the boat through the water. It’s really a marvel of engineering, especially since the kinks were worked out before the age of composite materials. There are some other spars whose names will be useful to know: booms, which run along the bottom of the sails, and gaffs, which get raised up in the air. Not every sailboat has gaffs, but they all have at least one mast and boom to hold the sails taut.
A catboat is small and has a single sail on a single mast set well forward in the bow, or front of the boat. (I think this would be the perfect painter’s boat, especially if I could find one towable with my Prius.)
A sloop also has one mast, with only one sail in front of the mast. If that head-sail multiplies, your boat has morphed into a cutter. Reliance, the 1903 America’s Cup defender, could be rigged as either a sloop or cutter. I drew Reliance to illustrate that single-masted boats can be gaff-rigged as well as Bermuda-rigged. She was a peculiar thing, built only to win America’s Cup and then sold for scrap. Like all transitory things, she was, oh, so pretty.
Ketches and yawls have two masts, with the back (mizzen) sail smaller than the front sail. The difference is that in a ketch (like Angelique) the aft mast is meant to push. It’s pretty big. A yawl’s mizzen sail is very wee, almost vestigial, and is way to the back of the boat. It’s basically an air rudder, used to keep things in balance.
Schooners started out having two masts, but three-masted schooners were introduced around 1800, and the spars proliferated from there. The only seven-masted schooner, the steel-hulled Thomas W. Lawson, was built in 1902. It was 395 ft. long.
While you might run across Victory Chimes, a three-masted schooner out of Rockland, the rest of the Maine windjammer fleet have two masts. A schooner’s forward mast is shorter than its mainmast, giving it an appearance of eagerness. Schooners come in all kinds of sail configurations.
Your assignment is to find a photo of each of these sailing vessels and sketch them out as I did, paying particular attention to where the sails attach to the masts, the angles at which the gaffs are running, and the height of the masts in relationship to the length of the hull. This is not about sailing, it’s about attention to the details that matter.
If you aren’t interested in boats, you can do the same exercise with cars, motorcycles, or varieties of apples; I don’t care what they are, just that you have six objects from the same class of objects.
The point of this exercise is not to create six beautiful boat drawings. It is to show you how much you learn by sketching. At the end of it, you should have a clear sense of why sketching in the field is a far better preparation for painting than taking photos is.
Remember, those of you who love boats: we’ll be sailing with Captain John Foss on the most beautiful of all windjammers—American Eagle—in June, studying watercolor painting on the move. For more information, see here.

While hundreds read the post, only a small handful answered the questions. Their answers are still fascinating.

Last week, I asked professional artists to tell a young painter from Alabama, Cat Pope, how they organize their business.

This is the first survey I’ve ever written. It was very easy to produce, but there are things I should have asked differently. If you haven’t taken it yet, you can still go to the link here. The results mostly speak for themselves; I’ve just added a few parenthetical notes.

The respondents were heavily slanted to the northeast. Would artists from other parts of the country have answered differently? What about Canadian painters? 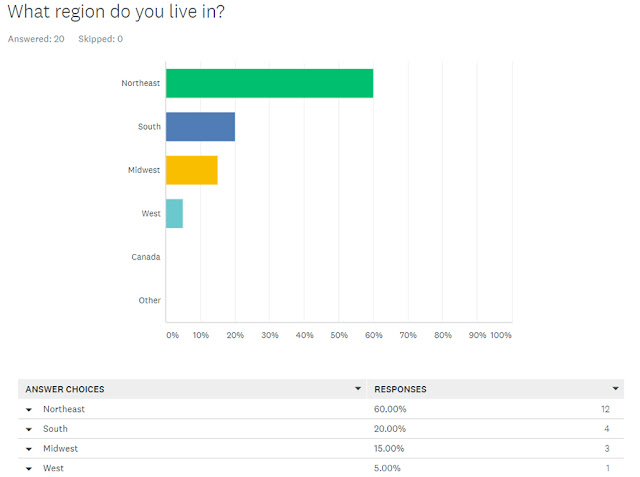 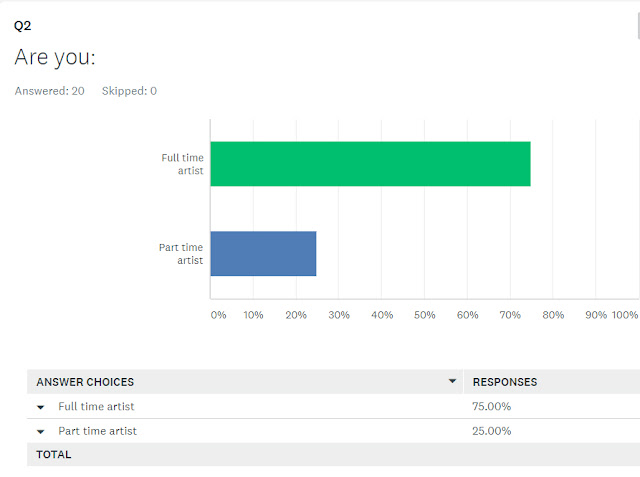 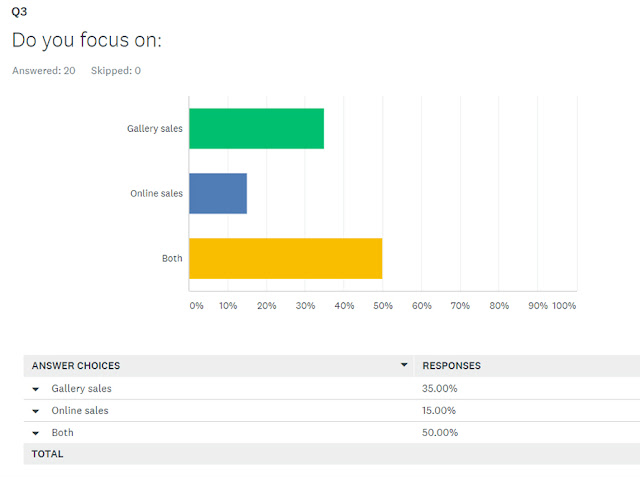 How hard, I wonder, is it to keep more than 3 galleries supplied with work? I should have also asked about other spaces like coffee shops, restaurants, or hotels. 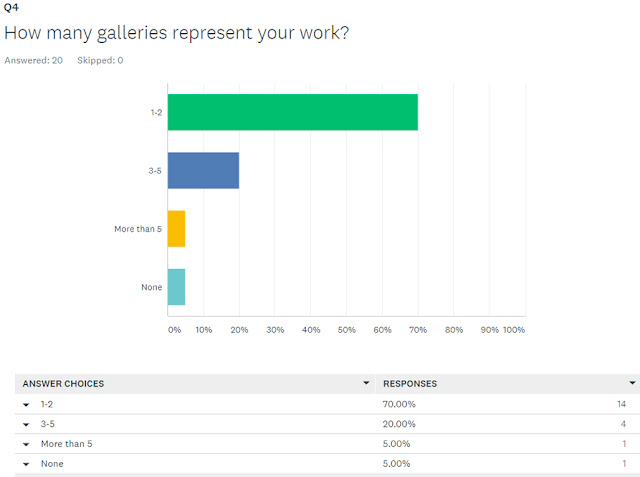 This next chart represents some serious online work, even for people who aren’t direct-selling through websites. 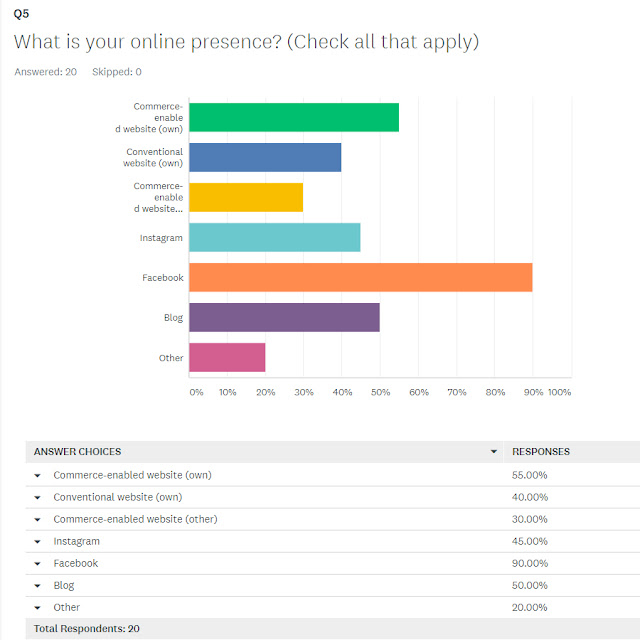 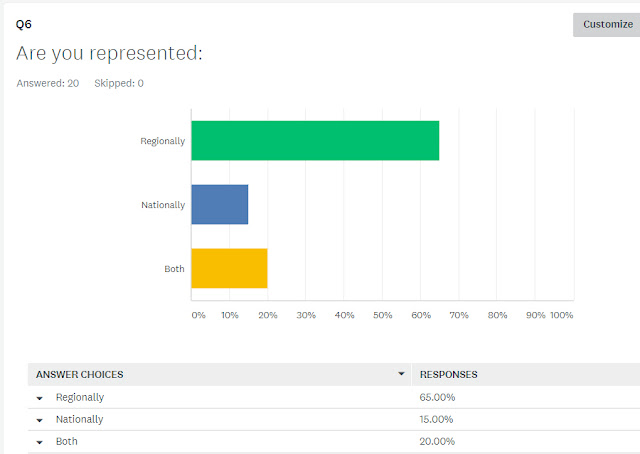 I feel the frustration of wearing all the hats, all the time. Apparently, I’m not alone. A lot of us put a lot of soul into the ‘sole proprietorship’ idea. 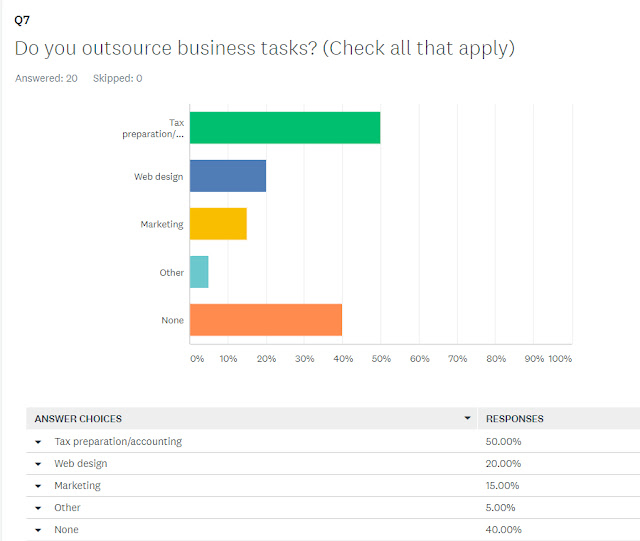 The following was a badly-designed question. I should have given respondents the opportunity to answer “none.” 40% of respondents skipped it entirely, which makes “none” the second-largest category. 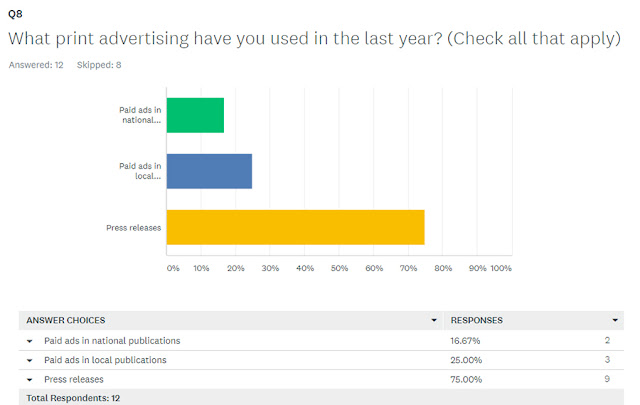 Another missed opportunity. Why didn’t I ask about annual sales goals? 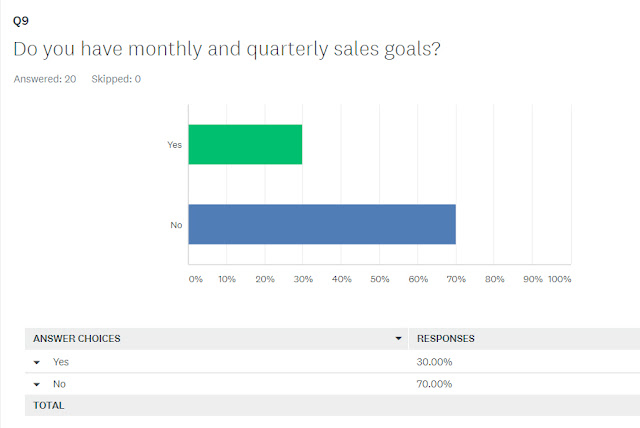 I included this last question because artists are always being asked to “showcase their work” in charity auctions, yet it’s not a deductible donation for us. When we see that work being sold for a fraction of its gallery price, we think it would be easier to just write a check. 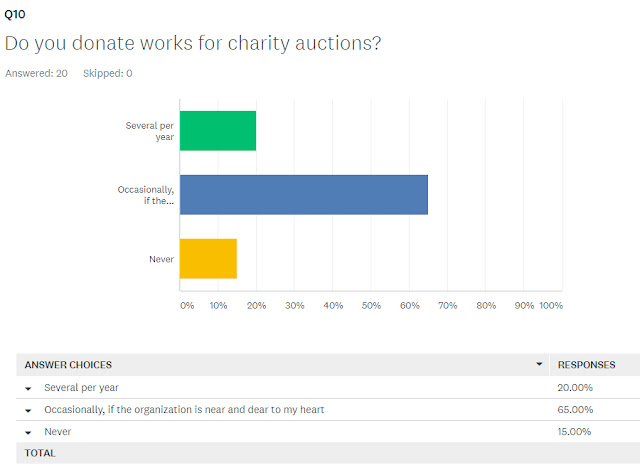