Skip to content
The edge is where everything is happening. There are many ways to control it.

Edges are where one shape ends and another starts. This might mean a border between two things, or it might be a fold or shadow within an object. Either way, there are many ways to approach edges. One way to control the line is the lost and found edge.  Softness is another.

My friend Brad Marshall is working on a painting of a coral reef right now, and it’s a stellar example of keeping it soft. He graciously allowed me to use his work here.
We’ve talked a lot about the importance of line in painting. Sharp edges with high contrast draw your attention. But to be effective, they require other passages where edges aren’t as crisp. In the case of this reef, Brad was seeking a special optical effect of being underwater, where things are blurry and greenish-blue.
Looking at the screen on which you’re reading this, you’ll note items in the periphery of your vision. The screen is in focus, but the items on the edges are blurred. This is how our eyes work—we have a highly developed cone of vision, and some peripheral vision to keep us oriented. You can take that same principle into your painting, to direct the eye into looking at what you want it to notice.
Brad started his painting softly because of the subject. But it’s also important because the coral at the bottom of the canvas has the potential to be the strongest draw. It’s lighter in color, and it’s closer to the viewer. But Brad, being a pro, isn’t going to be suckered into that rookie mistake. By keeping the painting very soft at the beginning, he is able to control where and what he concentrates on.
This is a studio painting being built in layers. That gives Brad ample time to work with thin paint handled wet-on-wet. In addition to his brushwork, he developed softness by carefully controlling value and hue shifts. Even in his central motifs he started with an underlying natural blur.
In oil painting, soft edges can be made by dragging a brush from one color to another, or painting directly into another color. Oil paints are absolute champs at blending and softening. So too is watercolor: washes and wet paper will assure you that edges stay soft until you want them to be defined.
Gouache and acrylic (correctly applied and not just mimicking watercolor) are not nearly as useful for blending. However, you can achieve the same effect of softened edges by employing optical blending.
In fact, since the 19th century, many oil painters (myself included) have generally eschewed the broad range of blending that oil paints offer. We’ve been influenced by Impressionism. We use flat blocks of closely analogous color to get the effect of blending without the brushwork.
Consider the Childe Hassam painting, above. He used optical blending to create the effect of blurriness that Brad is getting with brushwork. Note that the top of the rock outcrop is the same value as the sea. Your eye doesn’t notice the edge any more than it would have had he blended the edges with a brush.
Hassam used a staggering array of brushwork in his painting to create a variety of edges. However, none of it was done with traditional blending. Looked at closely, each color is distinct from its fellows.
A class exercise on design, and a chemistry question I can’t answer.

Yesterday was the kind of day that drives poets mad. Just below freezing, it rained heavily, with gusts of wind. Our plein air painting class was forced into the studio.

A grisaille (pronounced griz-eye) is a painting done entirely in shades of grey or another neutral color. Historically, it was used as decorative painting in imitation of sculpture. Some are what we moderns call duotones. They have subtle colors added to extend the value range. But for our class, they would be strictly in black and white.

Painting runs along two parallel tracks. The first is design. This is why painting teachers relentlessly push students to do thumbnails and other value sketches. Value is our most important tool. Get it right, and you can be wrong about a lot of other things.

(I came to this realization late, by the way. I studied with Cornelia Foss, who tinkers endlessly with the ‘rules’ of painting. From her I got the hairbrained idea of minimizing value as a structural concept. However, this was a misinterpretation on my part. That’s a good lesson in not asking the right questions at the opportune moment.)
The second track is color. It’s so much more interesting in some ways that it can be a distraction to the beginning painter. Mixing paints is both difficult and exciting.
Of course, value is part of color. In color space, value is the range from black to white. All successful paintings have some kind of pre-meditated value range in them. A high-key painting is one in which the contrasts are extreme. A low-key painting is one in which the range is narrower. In either case, there must be midtones too. They are also part of the design process.
It’s a lot easier to experiment with value when you’re not fussing about color management at the same time. One way to familiarize yourself with this idea is to paint a ten-step scale ranging from black to white. That’s not a bad exercise, but it’s boring. Instead I asked my students to do the monochromatic still life that I assigned in Monday Morning Art School last month.
Before that, however, they did an abstraction in charcoal, based loosely on the drawing I included in yesterday’s blog. Charcoal is the most painterly of drawing tools, but this is something you can do in a sketchbook while watching TV. It is a bit intimidating for someone to ask you to do an abstract drawing, but if I call it “doodling,” you can relax and get on with it.
There are only two rules:
A question: One of my students has had a problem with red pigment from her toned boards bleeding into her final paintings. She prepared a sample board for me to test her M. Graham acrylics vs. a similar red from a very inexpensive craft paint. I tried the squares at 15 minute- and 30 minute-intervals. The M. Graham pigment bled into the white paint, but the craft paint did not. I then tried the same intervals using my own Golden-toned board. Again, there was no bleeding. 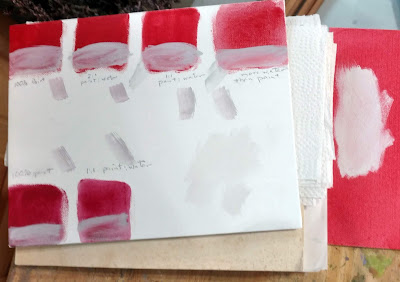 Acrylic is pigment suspended in acrylic polymer emulsion. It is supposed to be water-resistant when dried. That doesn’t mean it’s oil-resistant. I’m beyond my chemistry knowledge here, but if any readers can suggest what’s happening, I’d be very grateful.

Remember my pal Bruce Bundock from Kingston? He’s on a roll this year. The catalog for his Faces of Vassar is out. And he is featured in this month’s Acrylic Artist Magazine as one of five winners in the 60th anniversary show of the National Society of Painters in Casein and Acrylic.

The Kirkland Hotel at Kingston is on the National Register of Historic Places. Bundock painted it not as a tidy, quaint renovated place, but in the process of shedding its old skin and acquiring its new. “My painting is a form of investigative reporting on light, form and content,” he says.
Bruce started by making plein air studies from the parking lot of the hotel and proceeded to a large scale drawing. From there he gridded and painted the finished work. In other words, he works hard to make it look easy.
Let me know if you’re interested in painting with me on the Schoodic Peninsula in beautiful Acadia National Park in 2015 or Rochester at any time. Click here for more information on my Maine workshops! Download a brochure here.

Paint in the unfettered splendor of nature with celebrated artist Carol L. Douglas, in the bewitching, boundless and historic Adirondack Park—a week of unparalleled instruction at some of the wildest, most scenic painting locations the nation has to offer. Your outdoor adventure will be balanced by the comfort of an all-inclusive accommodation package at the historic Irondequoit Inn.
$775.00 inclusive!
·         Basic package: includes 5 nights lodging and meals.
·         Private non-smoking room with shared bath in either lodge or cabin accommodations
·         15 meals served communally
·         Breakfast: Monday-Friday
·         Box Lunch for off-site painting sessions,
M-F
·         Dinner: Sunday-Thursday
·         Coffee and Tea Bar
·         Sunday afternoon welcome reception
·         Morning and afternoon instruction sessions,
·         Monday-Thursday
·         Group critique session, Thursday evening
·         Available on request:
·         Non-painting partner accommodations
·         Private portfolio critique
·         Private Room and Private Bath: add $125
·         Suite with Private Bath and Kitchen: add $250
To register:
Call the Irondequoit Inn at 518-548-5500
For more information:
http://www.irondequoitinn.com/PDFs/Adirondack_wild_brochure.pdf
http://www.irondequoitinn.com/wild.php
Studio in Art
Saturday, 10-1
Tuesday, 2:30-5:30
(Oil, pastel, acrylic, watercolor)This class focuses on still life as a fundamental tool for developing drawing and painting technique. It is appropriate for both beginning and advanced students. Instruction emphasizes direct painting, where paint is applied solidly rather than through glazing. For watercolor and acrylic, the emphasis is on alla prima techniques.

High school juniors and seniors interested in pursuing a BFA are especially encouraged to sign up for this class. I have an excellent track record in helping students develop outstanding college portfolios.

Open Model Sessions, by invitation only

Our open model sessions are moved to Friday afternoons. Please contact me if you want more information.

Autumn is always a difficult time to schedule, since I have obligations elsewhere and there is a surfeit of holidays. If your class is cancelled, you have the option of taking the other class that week, receiving a refund, or taking a private lesson. Just ask me.


The schedule, as it currently appears
Note: we will still be painting outside, as long as the weather permits.