“Imagination without follow-through is mere fantasy,” pastor Quinton Self said on Sunday, making me almost drop my sketchbook in a shock of self-recognition. I have a good idea nearly every day. I’ve learned to ignore them and focus on my core mission (painting) but for decades I was bedeviled by ideas I couldn’t execute.

Until I was 40, that included painting itself. I was too tied to making a living to have time for my life’s work. How my husband (and cancer) helped me escape that is a story for another day. However, I do know the intense longing of staring through the shop window at the world of art and longing to be allowed in.

There are many reasons why we defer our creative dreams. Greatest among them is fear of failure. Somewhere in the business of learning a discipline, we face the fact that what we create will never match what we’ve dreamed. In our minds, we’re all brilliant artists; in reality, we’re all somewhat impeded. That’s a good thing, too, because the gap between what we see and what we execute is what the world calls ‘style’.

Nevertheless, the fear of mediocrity stops many people from starting at all. They defer their dreams to some future time. Their most common excuse is that they’re too busy right now. There’s a meme that reads, “being an adult is just saying ‘But after this week things will slow down a bit again’ to yourself until you die.” I’m not saying that our responsibilities are not real, but, to some degree, we all insulate ourselves in a cocoon of busy-work.

We never know, when we start, where we’re going to end up on the continuum between awful and greatness. That’s played out over time. As a teacher, I can’t tell either. But I can tell where a person will end up if he never picks up a tool and starts working: he’ll remain a fantasist until his dying day.

Painters hear the same comments over and over from people who stop to talk to us, so much that there is a small cottage industry of jokes about them. The one that strikes me as terribly poignant is, “I used to paint, but then…”

My father, in a sense, was one of those people. He had a scholarship to art school, but enlisted for World War II. He became a photographer and then a psychologist and painted on the side (and taught me). He intended to pursue painting in retirement, but by then the fire had been damped by tragedy.

I recently put a deposit down for a walking trip along Hadrian’s Wall in Britain. Yes, I know that travel restrictions are tightening; we live in uncertain times. But as I explained to my daughter, I don’t have any guarantees that in two years, or five, I’ll be strong enough to hike 75 miles. None of us are guaranteed a future.

I am reminded of two questions asked by a former pastor, Tony Martorana, that have resonated with me over the years:

Of course, pastors Tony and Quinton were talking about something far greater than mere art, but the point is universal. What are you going to do with the next year?

I can’t leave this subject without a plug for my workshops and classes; sorry about that.

Two opportunities to learn in mid-coast Maine
Baby Joshua and his mom are doing great, so I can concentrate on work again. There are several things I should have told you about and missed with the excitement of the last two weeks. Here are two very important ones.
I’m bringing Ann Trainor Domingue to teach a day-long workshop in my studio because she does something that seems magical to me, and I want to know how. Ann paints lyrical, mysterious, narrative paintings, seemingly drawn from within her own psyche. “I love the same things you do about New England. I just reflect on them in a different light,” she says. Annie’s developed a series of exercises to loosen up our thinking, and they will be good for everyone, no matter what their style.

Sat June 6th, 10-4
Carol L. Douglas Studio
394 Commercial Street, Rockport, ME 04856
Cost $95 per person.
Confused by too many options? Feel uninspired? Need help to get back to your artmaking? Uncovering Your Mark workshop could be just what you need to find your way!
Discover personally meaningful imagery and ideas through a fun guided exploration of things you love. Bring clarity and focus to help make sense as you implement fresh ideas for this phase of your lifelong art journey.
Think quietly about what kinds of things energize you. Sort and combine insights to form something new that feels more authentic by finding your mark.
Take time to work on loose sketches to explore these exciting new ideas and directions to help you stay on your path.
This workshop is a hands-on class aimed at artists of all levels. The first part of the class is a process of guided inquiry. Then, students will apply their self-discoveries through small scale sketching exercises and preliminary color play. It’s strictly limited to twelve students so you’ll get lots of attention. Every style is welcome.
Ann Trainor Domingue is a graduate of Rhode Island College with a BA Studio degree in painting. Her career has included working in adver­tising, as a teacher and as a painter. She is represented in public collections and galleries nationwide.
Download a flyer here or a registration form here.
Next session of weekly classes in my Rockport studio starts next week.
Some people wonder what we paint when the winter weather drives our class indoors. I build still lives, but they aren’t typical. For example, yesterday’s creation was a clash of greens including pine boughs, gift bags, wine bottles and more. The idea was to learn to mix and use a medley of greens without using any green out of a tube. That’s excellent preparation for spring, which really is just around the corner.
Marie told me, “I always come in and see a still life and think, ‘ugh’, but then I get into it and it’s great.” I’m not interested in still-life as a genre either, but I think painting from life is critically important, so I make an effort to make them unusual and interesting.
Working in my studio gives us a great opportunity to focus on color theory and technique. We have more time to concentrate on mixing colors and brushwork than we do in the field, where the demands of the scene takes over.
Our next mid-coast Maine painting session will meet on Tuesday mornings, from 10-1. The dates are:
February 25
March 3
March 10 (followed by a two-week break while I hare off to Argentina)
March 31
April 7
April 14
Painters are encouraged to broaden their skills in drawing, brushwork and color. Your own individual style will be nurtured. We’ll learn how to paint boldly, with fresh, clean color, to build commanding compositions, and to use hue, value and line to draw the eye through our paintings.
Watercolor, oils, pastels and acrylics are welcome. Because it’s a small group, I can work with painters of all levels. The fee is $200 for the six-week session, and we meet at 394 Commercial Street in Rockport.
While the north appears motionless under its mantle of cold, its workers are busy preparing for another summer season.
The temperatures have been cycling around zero since before Christmas. A blizzard is winding up its rampage across the northern states and a Nor’easter is climbing up the coast. There are freeze warnings in Houston and in central Florida.
But enough of that. If you look carefully, you can see that winter’s back is already broken, no matter what the thermometer says. The days grow perceptibly longer.
Yesterday I visited the North End Shipyard. The former Isaac Evans is up on the railroad. Under her temporary cover, her new owners are stripping her down and rebuilding her. Captain Doug Lee of Heritage was in the shop, cheerfully smashing glass panes out of window frames, preparing to rebuild and paint them. And Shary was sitting at her desk sorting a big pile of reservations for next summer’s sailings. While the world appear motionless under its mantle of cold, its workers are busy preparing for another summer season.
In the grey summer garden I shall find you
With day-break and the morning hills behind you.
There will be rain-wet roses; stir of wings;
And down the wood a thrush that wakes and sings.
Not from the past you’ll come, but from that deep
Where beauty murmurs to the soul asleep… (Siegfried Sassoon)
Just reading the poetry fragment, above, makes me feel better. And that is one of the main points of art. It transports you from your current situation and reminds you that better days are ahead.
Hanging in my studio-gallery is the above painting of my daughter biking along the Erie Canal. She was my model, but as she has grown up and away, the painting has assumed an elegiac sweetness to me. Almost all the paintings I own, either by myself or others, are of summer scenes. They bring me more joy than does ice and cold.
Even for those who can’t collect original paintings, there is art to warm our souls. Consider Claude Monet’s or Vincent Van Gogh’s hot, buzzing countrysides, or the long grassin an Edward Hopperpainting. Or Jean-Baptiste-Siméon Chardin’s fresh strawberries, or Wayne Thiebaud’s San Francisco streets. All of them evoke not just a sense of place, but of season. None of them are farther away than a click of your mouse. 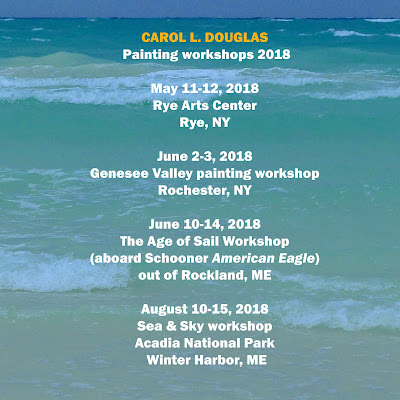 In a sense, I needed to write this as an antidote to yesterday’s post. After it was published, a reader directed me to this video.  It is cynical, but it accurately describes the high-end art market.
But here in the hinterlands, art continues to plug away at its primary job of sparking the human imagination. It can transport us away from our current reality of snow and cold to the warmer climes of memory. I urge you to indulge just a little.