Host housing is an imperative on the plein air circuit; buying a hotel room for ten days in a town like Sedona would wipe out any profit from the gig (and anyone playing at this level is in it for the money). But it’s difficult to show up at a stranger’s house, drop your paint-stained luggage in their entryway, and ask to be shown their guest room. Amazingly, it seems to work.

Earlier this month at Cape Ann Plein Air, I gamed the system by asking to stay with Rae O’Shea. I’d never met Rae in person, but we have a mutual friend in Jane Chapin and we’ve been Facebook friends for years. We’re both Anglophiles, so with the recent death of Queen Elizabeth we had a lot to talk about. Even with that, it was a little tough to pull into Rae’s driveway and announce, “Honey, I’m home!”

I met Jane Chapin when she was my host for Santa Fe Plein Air Fiesta. I think she had six artists staying with her; wisely, her husband was elsewhere that week. As there is no cell service in the Santa Fe wilderness, we were frequently draped over her furniture, using her internet. Amazingly, she not only tolerated me then, we’ve become fast friends. We went to Patagonia together, where we were stranded at the start of COVID. There we developed giardiasis (so-called Beaver Fever). “Friends that suffer unremitting diarrhea together, stay together,” I always say.

Lisa BurgerLentz and I once shared an austere but beautifully-sited summer cottage at an event. It wasn’t being used by the owner, perhaps because it didn’t have potable water. We’d been warned; we were careful; we still managed to catch Beaver Fever. While I like extreme plein air painting, it can be tough on the gut.

My all-time favorite billet was a tiny cabin in the deep northern woods by a lake. There was an outhouse and an outdoor shower and I slept in a loft. I could have cooked as there was a propane stove, but as usual I made do with sandwiches.

Like most of us, I’m a creature of habit. I’m early to bed and early to rise; I don’t eat out, and I don’t watch television or movies. After a day interacting with strangers, I want to crawl into a hole to read. Depending on my hosts’ habits that can make me either a fabulous guest or a terrible one.

This week I’m billeted with a lovely couple named Deb and Lisa at a luxurious home overlooking Sedona. Casey Cheuvront is also staying here, but she’s on another floor entirely. We could—if we chose—meet only by appointment. There’s a heated pool, a hot tub, and a gourmet kitchen. That last is completely wasted on me, but I have taken advantage of the pool.

Usually, our hosts are interested in the arts themselves, either because they’re artists or they volunteer for the organization hosting the event. Lisa is a jeweler herself, so she and Deb understand the nature of our days. And they’re wonderful company. Once more, I’m afraid, strangers have become my friends. 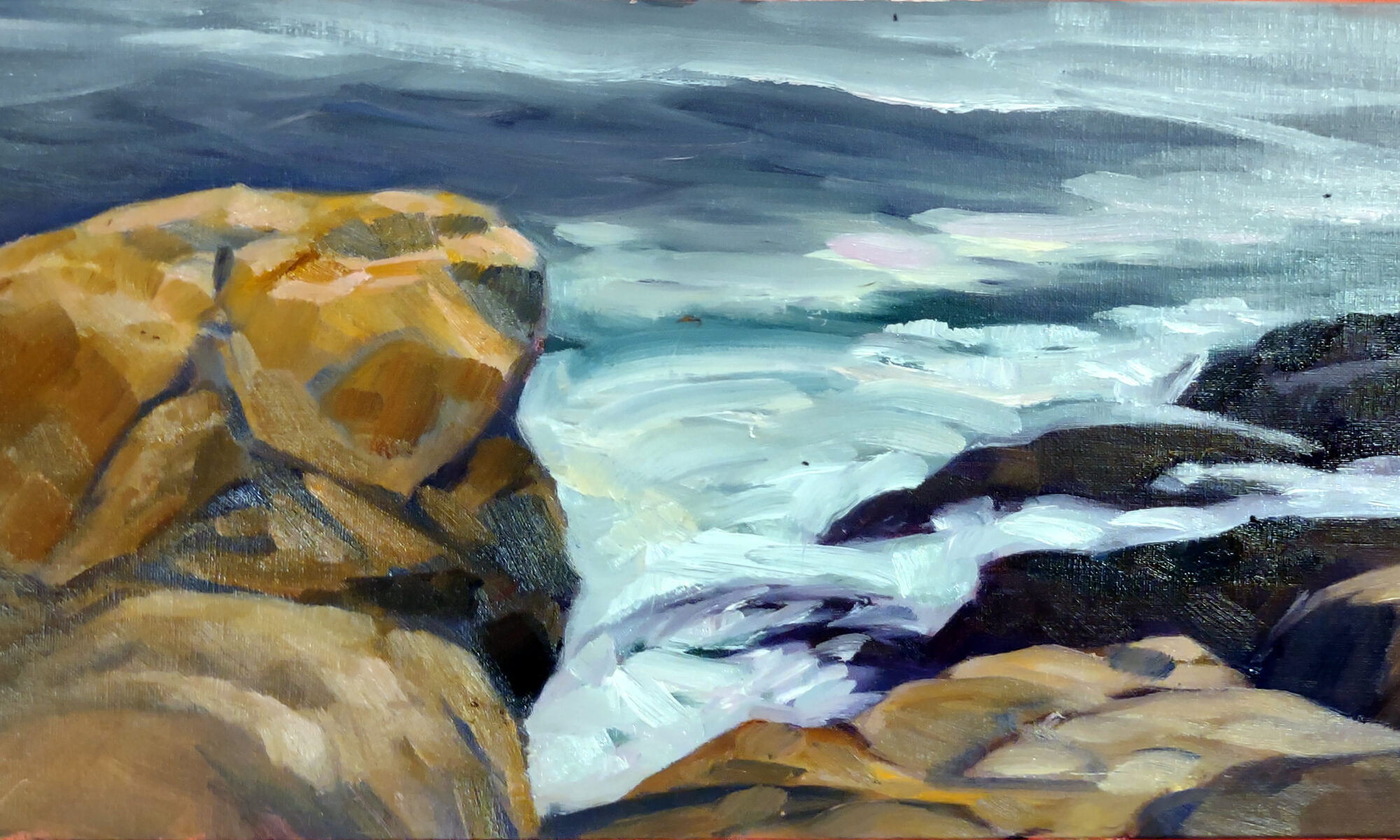 Back when I was raising children, they used to say (jokingly, I hope) that the oldest one was an experiment. You should throw that one out and try again once you knew something about parenting. That’s not true about my kids, but it is often true about my painting. I should have remembered that in the cold and rain the first morning at Cape Ann Plein Air (CAPA).

I blame it on trawler envy. We have fishing boats in Maine, but nothing like these big factories of the sea that they have in Gloucester. I took a moment to say thanks for all the fish of the ocean that feed so many of us. Then I set to work on the Jodrey State Fish Pier with Elaine Lisle and Richard Sneary.

The mizzle began to solidify into something resembling rain, so Dick (a watercolorist) packed up his easel and left. Elaine stayed and finished a lovely, bright, 10X10 square of the harbor. I struggled on until 1 PM, when—cold, wet and in need of a bathroom—I folded. Looking back at that start, I wish I’d quit hours earlier. The color and brushwork are fine. The composition violates my first rule of painting: don’t be boring.

I’ve been living in Maine long enough for its sedate driving habits to wear off my New York edges. I was dithering in an intersection when my phone rang. It was Eric Jacobsen. “Where are you?” he asked.

“Trying to turn onto Bass Avenue, and about to be killed by these fast Massachusetts drivers,” I muttered. Okay, that’s a paraphrase.

“Well, don’t do that,” he said in a reasonable voice. “Charles Newman, Mitch Baird, and I are at Bass Rocks. Come over here.”

That was all I needed to escape my slough of despond. Rocks, surf, and good company. The game, as Mr. Holmes said, was afoot.

CAPA’s quick draw is immensely popular, drawing about a hundred non-juried artists in addition to those of us in the juried show. This year it was at the Allyn Cox Reservation in Essex, which must be a beautiful property when you can stand upright to see it. My goal was simply to survive the gale force winds. I set up next to Jonathan McPhillips as he’s big, and I thought he’d be a good windbreak. I set my easel as low to the ground as I could. As soon as I saw Jonathan’s block-in, I knew he had a winner. It was a wonderful composition.

Winds like those mean wild surf, so Eric, Mitch and I set off for Cape Hedge. It was difficult to paint, but all that dashing, crashing water made it so worthwhile. We worked small, because anything else would have blown away.

I know that Mondays are usually an art lesson, but I haven’t got it in me this morning. I’ll leave you with this utterly prosaic truth: if at first you don’t succeed, try, try again. My first painting was horrible. My second was acceptable. My third was interesting, my fourth (quick draw) made me happy, and I really like my fifth one. Today is a new morning, and I’m off to beat the sunrise.  Later, friends.