I’m no fan of the Guardian, but this recent (unsigned) piece is one more argument about a well-known problem in the art world. Women’s art sells at a shocking 10-to-1 markdown from men’s work—"for every £1 a male artist earns for his work, a woman earns a mere 10p.” That should come as no surprise to readers of this blog; I’ve written about it here, here and here, among other places.

Women artists earn less than their male counterparts; they are collected less by institutions, and—this is something that surprised me—if they sign their work, the value goes down.

Meanwhile, in blind tests, viewers can’t tell the gender of painters by the work alone. My pal Chrissy Pahucki was so taken by that question that she replicated the blind study using plein air paintings by artists she knew. Her results came in about the same as the original study; i.e., the same as guessing.

Gender disparity is something I track as I watched the prizes being given in juried shows. So how did I fare as a juror at Adirondack Plein Air? I’d promised organizer Sandra Hildreth I’d set my own biases aside. With few exceptions I did not know who the work was by. (Although artists are told to not sign their work in advance, that’s difficult to enforce.)

Of the nine prizes I gave, overall, three were to women. The top three all went to men. Ouch. That’s hardly a large-enough sample to convict myself over, but it is cause for reflection.

I stress the formal elements of design over mood and evocativeness. (I scarcely know how one would judge those subjective values.) Perhaps that gave the edge to men. Does that mean that quantification, classification, and structure are somehow male thinking? That’s an argument that troglodytes on both sides of the culture wars might happily embrace. I reject it myself; I have the brain that God gave me, and he made me female.

This concept of a male-female divide is in some ways stronger than it was in the benighted 1950s and 1960s. Back then, nobody went on about some inner standard of male and female that our outer bodies might be in misalignment with. In fact, nobody spent a great deal of time analyzing our minds unless there was something starkly wrong with us.

I may not have been allowed to wear trousers to school until the seventh grade, but there was no pink-and-blue differentiation in kids’ clothing in my youth. Outside of school, we all wore the same mud-stained shorts and shirts. We had the same toys. We played sandlot baseball together.

At the same time, artists like Lois Dodd struggled mightily against a system that denigrated her work in comparison to her peers. While I wish I could stuff Barbie-culture back in the hole it came from, I never want to go back to the days of ignoring women artists.

That ship has started to turn. “Even though prices for work by female artists are starting from a far lower base, they are currently rising 29% faster than for art by men,” said the Guardian. “For canny investors who want a bargain and a higher return, it’s a no-brainer.” 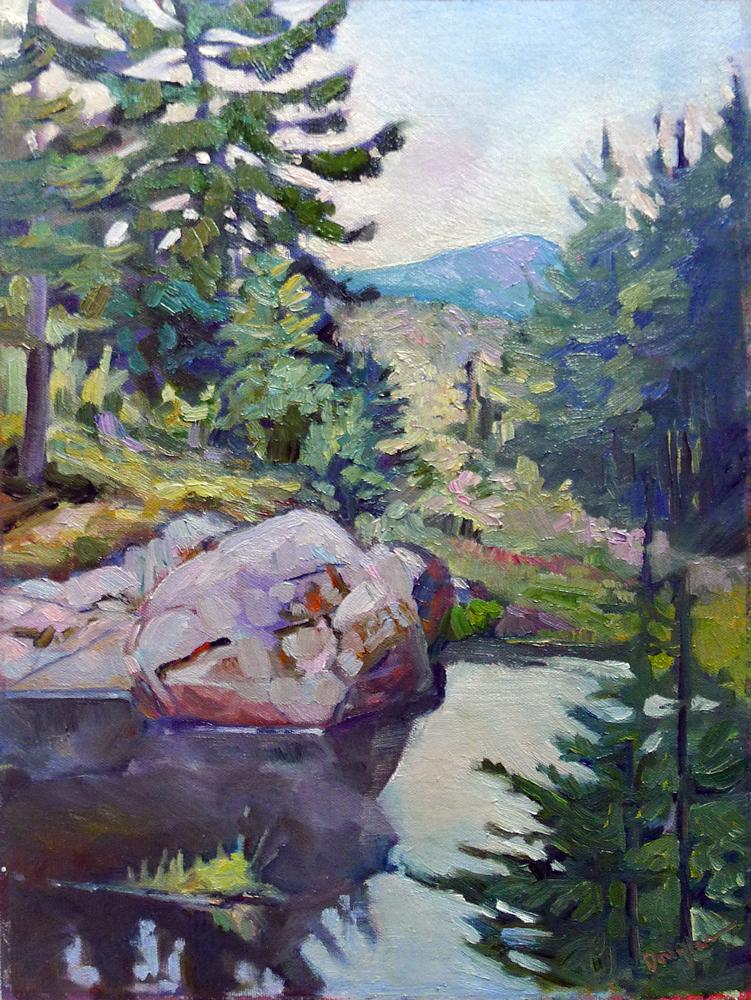 I drove from Paul Smiths to Saranac Lake, NY, in a morose mood. Here is the gulch where Kari Ganoung Ruiz parked and painted; here is the cemetery where Laura Martinez-Bianco and Crista Pisano clowned around; if Chrissy Pahucki were in town, we could go to Donnelly’s for ice cream. I was on my way to a meet-and-greet for Saranac Lake ArtWorks’ 14th annual Adirondacks Plein Air Festival at the Hotel Saranac. I’m don’t enjoy large parties; feeling sorry for myself wasn’t helping.

That was absurd, of course. I ran into Kathleen Gray Farthing, Patrick McPhee and Tarryl Gabel as soon as I walked in. Lisa BurgerLenz and I reminisced about contracting giardiasis together back in the bad old days; there’s nothing like diarrhea to bond friends for life.

I’ve promised organizer Sandra Hildreth that I can remain objective in the jurying, and I’m fairly certain I can do that with personalities. With artistic style, it will be more difficult. We all fit somewhere on the continuum between abstraction and realism. We tend to respond to paintings with a similar outlook. I must look past my stylistic prejudices to see more universal qualities. This is where a rubric for formal criticism is helpful.

As much as I stress design and execution, there ought to be something in painting that transcends mere technique. We may have said otherwise in the crazy days of the twentieth century, but a painting really ought to mean something. Otherwise, it’s no more important than a square of designer fabric.

I’m intimately familiar with the Adirondack Preserve. I know its history, the terrain, and the people who live and work here. I am grounded in the spirit of the place. That makes it easy to assess these painters’ core message. But what if I were jurying in, say, Florida, where I have no affinities? I’d be thinking in stereotypes, which raises the risk of missing deeper insights altogether.

That’s the conundrum for event organizers. They want jurors from away, so that they’re not swayed by friendship. At the same time, these same jurors must judge not only the formal qualities of paintings, but their inner spark of meaning.

One of the best contemporary paintings I’ve seen of the Adirondacks was a nocturne by Sandra Hildreth. She painted it at a campfire at a lean-to on Black Lake. It had a strong, simple design and captured an experience most back-country people have shared. A few years later, Chrissy Pahucki and I attempted the same idea by renting a campsite and painting by firelight. I have Chrissy’s version hanging in my kitchen. It is powerfully evocative.

I’m a strong proponent of process. I don’t think you should be teaching or critiquing unless you can break your technique into discrete steps. As much as I strive to be objective, however, painting is ultimately communication, and that’s one of the great mysteries of human life.

Done well, painting slips the bonds of mere technique and enters another realm altogether. On Friday, when I’m jurying this show, I’ll be focusing on the technical side of painting, but I pray that I’m never so earthbound that I fail to see what’s transcendent.