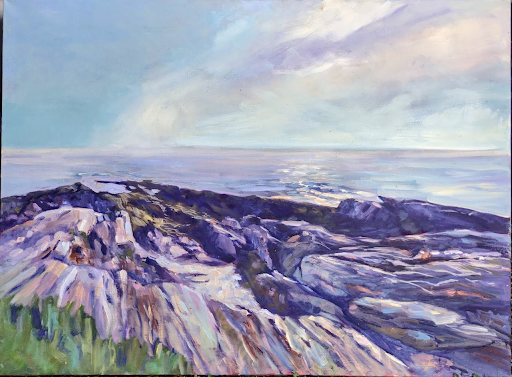 A reader sent me photos of Petrified Forest National Park in Arizona.  “How do you make sense of a scene like this to paint?” he asked.

How different are these petrified trees from the tumble and scree of Maine’s coast? In detail, they’re significantly different—more on that later. But in overall plan, they’re the same idea.

Above is a painting I did of Cape Elizabeth called Foghorn Symphony. Trundy Point is a long spit of rock that juts out into the Atlantic Ocean.

I photographed my sketch as well. This drawing moved Ken DeWaard to accuse me of doing Paint-by-Numbers. In a way he was right, because I was numbering the values from one (sky) to four (deep shadow). The drawing is vastly simplified, of course. Its purpose was to freeze the early-morning light so I could finish this vast 30X40 canvas in the field over two long days. By afternoon, the light is completely reversed, but I had it locked in my mind.

In addition, my drawing allowed me to check my composition before I committed myself.

My sketchbook sat at my feet after I transferred it to my canvas in broad brushstrokes. I referred to it often.

I painted in one section of rocks before I started on the next. I don’t always work like this, but it’s a good way to not get muddled in a complicated scene. The sections didn’t have their final modeling, but there was enough detail there so I could come back and fill in the light at the end.

I was sacrificing the first axiom of oil painting (darks to lights) in the service of the second (big shapes to small shapes). This only worked because I had a plan in writing, in my sketchbook, where I could easily refer to it. You can edit a grisaille to your heart’s content, but erasing and revising with colors is a sure-fire recipe for mud.

You can’t break the rules until you know them

I almost always work with an overall grisaille, but I broke that rule in this case. Fog and light are transient, and I wanted to capture them as fast as possible.

Yes, you can break rules, but it helps if you have a solid grasp on them first. I could only fiddle with the grisaille because I’ve internalized value structure by having done hundreds of them.

A tumble of rocks in Arizona is only the same as one in Maine in broad concept. In detail, they’re very different. There are painters who come to Maine and render the rocks as rounded brown lumps, because that’s how rocks in the Midwest look. I’m sure there are Maine painters who go to Sedona and render the red rocks there like granite.

For heaven’s sake, look before you pick up your brush. The cleavage, the color, and the erosion patterns are unique in each rock formation. An hour spent sketching will save you hours of bad painting.